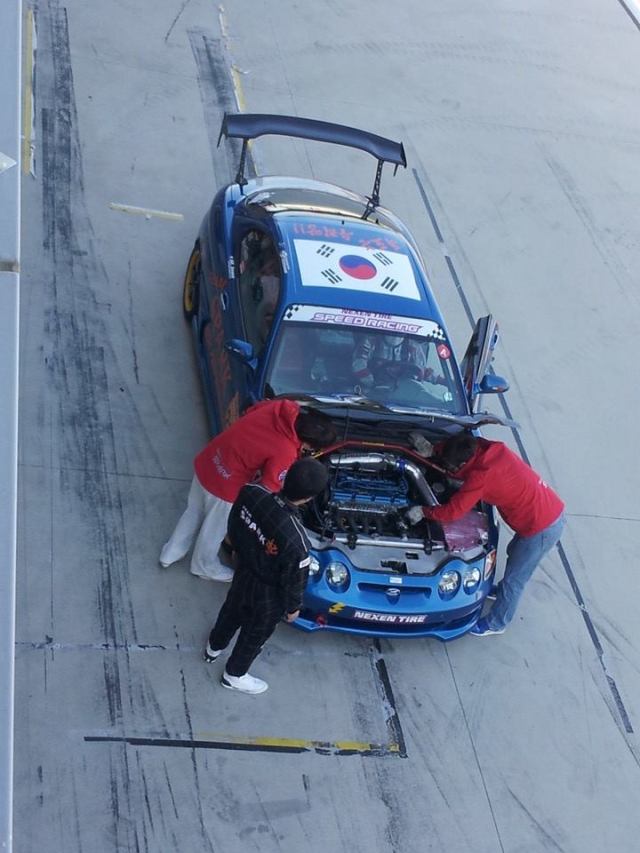 I had gotten to the point I was feeling pretty cocky with my Korean. Granted, I am perhaps a bit (okay, a lot) more prone to bouts of cartoonish egomania than most, but this particular run of overconfidence wasn’t entirely my fault.

You see, on the morning in question the nice lady selling me coffee said “no, you aren’t intermediate, you are definitely an advanced speaker.” Then there was the Toastmaster’s meeting where I introduced myself in Korean and everybody was impressed with my hanguel life story. I taught a three hour class for my low level college students about English grammar and I’d done it almost entirely in Korean. Oh, and then I spent half an hour shooting the breeze with a cab driver who wanted to exchange tips on dealing with small children. I had missed, in all three exchanges, maybe five words total. I had only once confused the person to whom I was speaking and then only briefly. This all made me feel pretty badass.

Thus, when my friends at the Turbo Spark Racing Team invited me tag along for their club race at the Yeongam Formula 1 racetrack I did not worry. It didn’t bother me that none of them spoke English above the level of three word sentence fragments. That my friend Chris, also coming along, spoke very little Korean, likewise caused me no great concern. I’d translate between them and help out with the race car prep. Cake.

Chris and I showed up at the race shop around 9 p.m. My Korean friends at Turbo Spark were then loading the racecars onto a transporter. I had a great idea to use a tow-strap to loop around the blue Tiburon and secure it a little better against the back door of the transporter. I ran up to the transporter, jumped into the back and came to the quasi horrifying realization I had no idea how to say “tow strap” or “tie to.”

Tow strap is an especially difficult sort of word to figure out because most of the technical, car specific terms in Korean are derived from English or German words, imported through the filter of Japanese. For example, the Korean word for “shock absorber” is ultimately derived from English. However, first it migrated to Japan where a generation of Japanese people pronounced it according to their local phonology rules – whatever those rules are. Then some Korean in Japan or Japanese person in Korea imported the Japanified term to Korea, where a whole new set of pronunciation rules take effect and you end up with 쇼바, pronounced “show-bah.” Good luck deducing that sort of thing on your own. The dictionary is no help either – you’ll get the term “완충기” (wan-choong-gee), a physics-lab word which refers more commonly to rubber bushings.

This left me to describe the device I want via this incredibly inelegant sentence. “자둥차를 잡는 선이 없이?” Literally, “is there not a car catching line/fiber available?” If anything, it sounds worse in Korean than English. At this point, my Korean friend points at the ropes already “catching” the car and shrugs his shoulders. Of course, I should just say I need something with a ratcheting lever, (at least I know lever is “guri,” not that it helped) but I had no idea the word for ratchet and the real strong suspicion the dictionary is going to give me another physics lab term nobody would understand. I gave up and busied myself checking the rest of the tie-downs.

We drove through the night and arrived at the hotel. Hotels are okay, I’ve done hotels before. I talked to the night attendant and got the room with no trouble. This boosted my confidence a little bit and I went to sleep sure I’d do better the next day. That was not be.

The next day I confused my Korean friends by saying 턴 1번에서, 미숙아 너무 일찍히 브레이크 밟았다고 생각해요. “I think you are stepping on the brakes too early in turn 1.” We finally figure it out after a lot of wild gesticulation on my point. It turns out you have to say, “브레이크 포인트는 너무 빠르다,” literally “I think you are doing the brake point too fast.” Over the course of day two I try and fail to express my opinions regarding floor jacks, taking an inside or outside line through turn 3 and hitting fastballs at the batting cage. To top it off, I make an incredibly basic error about an event that went until 10:00 a.m. I completely fubared the translation, told Chris it starts from 10:00 a.m. and we therefore missed the opportunity to take a parade lap.

On the ride home I thought about this and came to an obvious but often overlooked truth – context matters. I had been “doing well” with my Korean because the situations where I’d been using it were familiar. I’ve gotten coffee a million times. I talk about education and developmental theory pretty commonly. I B.S. with every cabbie I meet and have done so since I arrived in Korea. In all these situations, I had subconsciously developed a pretty good idea of what the other person would say, how to answer it and generally what to expect. Except for developing my pronunciation, I really wasn’t improving my Korean much with these encounters. This is how you end up knowing how to say “저의 의견에서, 외국어 학생들 위해서 암묵적인 의미가 가장 중요합니다” – “in my opinion, implied meanings are most vital for language learners” – but unsure of the word for “purple.”

I learned a lot of Korean last weekend and I wouldn’t have gotten any of it if I hadn’t been in a novel situation. My fellow second language learners might do well to remember this in their own journeys toward fluency.

If you enjoyed this article, please follow my blog.

If you’d like to see the photos from my weekend and the races, please click on this link.