This is an excerpt from “Price Fixing,” a novel I intend to pursue soon. If you’d like me to focus on this novel next, please vote here. 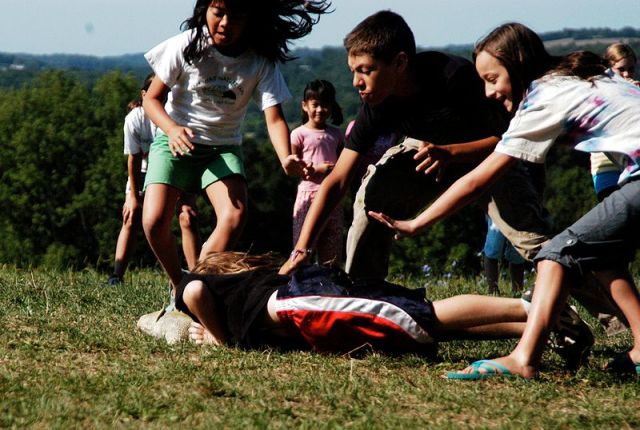 My first real, fully formed memory concerns a game of tag. I wasn’t even playing, I don’t think – perhaps someone had just tagged me out. Regardless, Paulo was there and when I say that Paulo was there I mean he was everywhere. Tall, graceful and thin, he looked like an anthropomorphic ibis. Blonde hair spilled down to the tops of his perfectly straight, nursery school shoulders. When he ran after the other children, each step seemed to wrinkle the fabric of space and time. Two, three strides at most and he’d have the child cornered. Arms spread wide, head pulled back and ready to strike – his manner reminded me of that one time a hawk killed an entire nest of pigeon chicks in the fields near my house. The end seemed inevitable whenever Paulo ran, not that his starstruck victims seemed to mind.

A big part of me had been terrified to join the game. To start with, I had no chance of beating a god among boys like Paulo. Who was I to approach the shimmering ubermensch in silk clothes, with the BIG DEAL father, the bombshell mother – at the time I thought this meant she could explode, which is even more intimidating if you think about it – and the house in the clouds? I was nobody, worth nothing compared with Paulo.

I remember considering all those good reasons to just stay out. But I had pride, a sneaky little voice in the back of my head that said don’t be a pussy, which at that time I was pretty sure referred to a lazy sort of cat.

The fear of being a lazy cat finally overcame the fear of appearing in Paulo’s presence. I raised my hand and said “hey guys, I’m gonna play, too.” The others were too busy admiring Paulo’s majesty to take note of insignificant, disposable little me. I didn’t blame them, I would have done the same. So I just crouched in the gravel so that Paulo would know I’d joined in whenever his gaze came over me – a happening for which I had to wait a distressingly long time.

A pretty little girl with red curls and an expensive dress giggled as Paulo tagged her between the shoulder blades. The honor of being touched by Paulo spread over her beaming face and she gazed, unnoticed while he turned to search for his next victim. I clapped twice, made eye contact and ran as fast as I could towards the garden.

My joints were so young and fresh then and I remember the effortless glide with which I ran. The windless day seemingly the back edge of a hurricane for the way the air pulled back my hair and danced in my ears. I imagined the other children watching us, perhaps cheering me on for my courage (hah!) and rooting for the underdog.

I heard Paulo’s footsteps drawing near and made the hardest cut I could, my left foot slipping against the gravel and the muscles in my back straining to create some tiny sliver of space between me and the game’s inevitable conclusion. He lunged and missed and stumbled and gave me the time to re-open a gap. One of the children gasped and the cocky, proud little boy inside me smiled. I’d almost reached the part of the garden with the marble planters and non-functioning stone bridges when I heard Paulo getting close again. I turned hard left, hard right and accelerated with all the power in my short little legs. Paulo’s breathing, harder now, more ragged, came down on my neck. I jumped, head first under nearest stone bridge, slid beneath its tiny span and rose to continue my flight. The scratches and cuts on my exposed arms did not bother me, in fact, they made me feel tough. The bruise welling up from where my shin had struck the stone abutment felt like a badge of honor.

It was only after a half dozen steps I looked back and saw Paulo lying in the gravel. Blood poured from his bronzed forehead and stained his beautiful clothes. The smooth skin of his knees had scraped across the rocks and dirt, tears emerged in shimmering, pregnant lumps. A black haired boy screamed and ran to get a teacher.

My stomach climbed inside my torso. My heart sent percussive, regular pressure waves through my ears and jaw – I said “I’m sorry, I’m sorry, I’m sorry” when the teacher came. She scooped beautiful Paulo, the exhaulted scion, into her arms and turned back to the school house without acknowledging me. Solitude like falling down the stairs, fear like an unwanted kiss – I shivered as I walked bloody and covered in dirt to the cafeteria.

The cute girl with red curls stood by the door glaring with her pudgy, bright red lips puckered and her tiny, white hands clenched. She punched my dirty cheek and stomped her foot and said “you are bad.”

Her words were not true at the time but they became true, or at least I think they did. I don’t know, I hope not. I’m in a fragile place in my life right now.