Dez Bryant and the Sins of the Father 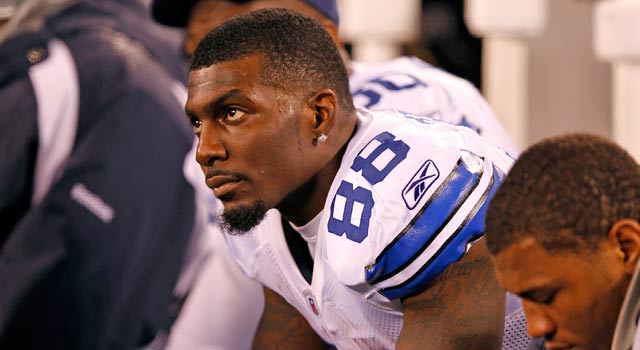 You shall not bow yourself down to them, nor serve them. For I the LORD your God am a jealous God, visiting the iniquity of the fathers upon the sons to the third and fourth generation of those who hate Me.

Most of you probably don’t know much about Dez Bryant, so I’ll give you the quick version. He is a very good athlete, his childhood seems to have been a collection of every stereotypical horror conceivable for a ghetto product, and he gesticulates excessively. The reason I’m interested in Mr. Bryant, however, has very little to do with these background facts and much to do with an unusually stupid, exceptionally self-righteous sports column.

You see, three years ago Jeff Ireland, the general manager of the Miami Dolphins football team, asked Mr. Bryant if his mother was a prostitute. Mr. Bryant, unsurprisingly, took offense at this line of questioning. Mr. Ireland’s defenders, almost exclusively Dolphins fans incidentally, explain that the question made perfect sense in context. When Mr. Ireland asked Mr. Bryant about his family, these people say, Mr. Bryant responded by saying that his father was a pimp and that his mother “worked for him.”  Frankly, it doesn’t matter which version of events is true because the entire premise of Mr. Ireland’s question is ludicrous.

What could he possibly have learned by asking that question? Everyone knew Mr. Bryant came from a horrible family. It was common knowledge that his mother, 15 at Dez’s birth, would pump out three kids by the time she was 18, would go on to an incredibly unsuccessful drug dealing career and dabble in PCP.  It was equally well know Mr. Bryant’s father had been a forty something year-old statutory rapist and pimp at the time of Mr. Bryant’s conception. More importantly, why the hell was Mr. Ireland attempting to judge Mr. Bryant’s character based on the actions of his family? Have you ever fielded questions about your mother at a job interview?

For answers to these questions, I think it is best we look into the unusually stupid, exceptionally self-righteous column in question. It is evidently okay to ignore a prospective employee’s actual choices and judge him by his family if, after the fact, the 22 year old in question once got kicked out of a Dallas business establishment for inappropriate attire and cursing, because all inappropriately dressed 22 year olds are made of evil. It’s okay to ask him if his mother’s a whore because he spent $55,000 throwing a party for his teammates at a steakhouse, since hosting your friends at a big fancy meal is a sure sign of moral decrepitude.  It’s also okay if Mr. Bryant buys jewelry, because expensive jewelry also means you are a bad person. And hey, if there was an unsubstantiated rumor he pushed his mom once, well, it’s pretty clear we are dealing with the very personification of Satan.

Mr. Bryant, despite having no family or home to speak of after the third grade, has never been convicted of a crime. Mr. Bryant, despite drugs in the house and mommy in jail, pulled his once hopeless academic scores high enough to earn a college scholarship. Mr. Bryant, despite this chaotic upbringing, had the courage to seek anger counseling from his freshman year in high school. It’s hard to imagine a more Republican story of pulling oneself up by the bootstraps.

So why does he get so much hatred? Let’s look at the comments fans left.

You have done nothing to show that you are a good citizen or a good person. Bryant is nothing but a hood rat who eventually will end up broke and in jail. I guess the Rookie Symposium did not make a dent in his bad attitude. He will wind up like TO, Packman and all the rest that have no money and an entorage to support. I never wanted Bryant or Marshall, you can not fix bad people.

What would a trade cost for a ho crack addict slapper ? Two bath salt sniffers and a used jock ?

In context Ireand was right to ask, and right not to disclose the detail. Bryant has shown his true colours and he is a thug. Giving him a multimillion dollar contract is like throwing pearls so swine.

C’mon with all that Ireland’s racist crap!!!! Bryant came off like so many of these kids trying to be “hood” anwith swering of the questions!

Give me a break! If there was equal rights for all…whites would be able to recieve welfare like all the other free riders. Try making your own money…it’s rewarding.

Dez Bryant will be either broke or dead in a few years so why waste time talking about this thug. He was a bad guy in college, he is a bad guy in the NFL, I think if anything Ireland by not taking him proves that he has some good judgement. Let him be Dallas problem.

And perhaps most poignantly –

It is not a racist question, the next time a white guy has a Daddy who is a pimp and a crack selling Momma that worked for him he will also ask him if his Momma was a ho. It is just that most pimps are of the dark persuasion, that is not racist just fact.

It would be easy, and uninteresting, to simply call this racism and move on, but I think it’s at least a little more complicated than that. There are lots of stories of black athletes from horrible backgrounds leaving said horrible background (preferably with the help of a middle class savior) and becoming “an inspiration to us all.” Nobody, after all, is calling Michael Oher a thug when he draws a holding penalty. And honestly, watch the way Mr. Bryant plays, the things he says in interviews and on the sidelines, and I get the very strong sense that this is a guy who tries and tries in the most desperate sense of the word.

There are lots of little reasons I think we hate Dez Bryant. He’s a wide receiver and wide receivers are “prima donnas” in sports yack. He plays for the Cowboys, who lend new meaning to the word dysfunction. He dances in the end zone – which is bad(?). But I suspect that the big reason we hate him is because of what he hasn’t left behind.

Look back at those comments and really pay attention. Most of them are not attacks on black people per se, but they are unanimous in their contempt for a specific type of black culture. The ghetto bunnies who take welfare and sell crack, the hordes of uneducated boys destined to spend their lives in prison, the girls who have three kids by the time they’re 18, the fact that a disproportionate number of pimps are, in fact, black men from inner cities. And it’s not just conservatives who have reason to hate this subculture, gangster rap is the only mainstream form of entertainment where men – you stay classy Lil Wayne – can perform, with impunity, lyrics like this. “Real niggas, fuck these haters, These hoes got pussies like craters, Can’t treat these hoes like ladies, man… Pussy, money, weed, codeine. She say my dick feel like morphine. I hope my name tastes like sardines to these niggas.” Anyone who likes women would be at least uneasy with the ghetto subculture, and they should be. It’s the same for anyone who really wishes we’d stop referring to black men as niggers.