In trivial news, the New England Patriots lost the 2008 Super Bowl to the New York Giants. In non-trivial news, I celebrated that day by attending the momentous, historical Stupor Bowl VI.

Black Label members are often conspicuous by appearance alone, covered as they are with aggressive tattooing. They seem to show a disregard for hygiene and enjoy a cheerful willingness to suffer physical pain for the enjoyment of the crowd. They love to combine combat boots and cutoff jeans, don military surplus jackets and sew-on patches that say stuff like “Chupacabra Policia.”

Their raison d’etre—modified bicycles—means members build tall bikes made with two or even three frames stacked atop each other, welded or fastened together with bolts and braces. Some of their bicycles come with bumper car-style skirts, others form combination bicycle/shopping carts and then there were the completely useless bikes with centrally hinged frames.

From a practical standpoint, the tall bikes are hard to get onto and a great way to tear ligaments getting off, but even they are more sensible than the hinge bikes. Hinge bikes swivel in the middle and, judging by the number of crashes, are pretty much impossible to corner. The fuster cluck usually began with a wobble, then the rider would bounce his or her head of the pavement and, as they were rebounding, become entangled in the uselessly flopping bicycle frame. I like to think of these bicycles as hip and abs workout machines for people who would prefer to remove their own skin.

The first Black Label activity started around 3:30 p.m., well before the Big Game, and also well before the arrival of club president “Gyro” Mike Jirish. When Mr. Gyro, wearer of the world’s trashiest rat-tail, did show up, he hastened to explain the machinations of Black Label.

“We take the bikes that would be wasting away,” he said. “And then we alter shit. Mostly cutting and welding.”

He paused, as if contemplating the nature of space-time, before adding.

“Then there’s a lot of drinking, and we smell, too.” 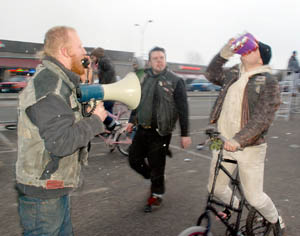 Gyro Mike supervises Elliot “Smelliot” while the latter attempts to down an entire six-pack at once. Beer chugging champion Luke Houley looks on. Photo by David Robert

An especially rich source of abandoned bikes, Mike said, was Burning Man. If you ever wondered what happened to that Schwinn you left out on the playa, it probably faced a torturous new life at the hands of Black Label’s amateur welders. Those amateur welders, in turn, tend to adorn their creations with many sharp edges and bountious rust.

“You’ve gotta keep your tetanus shots up if you want to be in this club,” Gyro Mike said.

Combine the horrific fabrication and high levels of intoxication with club sports like bike jousting and you will see the Stupor Bowl provides the spectator with far more potential for gruesome injury than the football game inside.

This all brings us to Minnesotan Luke Houley, a Black Label member who comes from the frozen north every year for the event. Wearing highwater pants and sporting a belly that says “I’m in my third trimester,” Houley graces his face with awesome Mike Tyson-style tattoos. He’s got parallel lines running over each ear, across his cheeks and over his nose that make a Maori warrior look like a dilettante.

Perhaps in a further attempt to bolster his “limited employment prospects” cred, Houley has trained to dominate the “beer-chugging-while-riding-a-bike competition.” The three-time defending champion explained that the object of this contest is to down a six pack as quickly as possible without falling off your bike.

“You’ve got to shotgun ’em to win,” Houley said. “Many people drink too slowly.”

So slowly, in fact, they didn’t spend five minutes puking in the parking lot, unlike the champ.

While Tom Petty dragged his ass around the stage during halftime of the football game, the Black Label Bikers staged a drag race where two competitors on similarly ridiculous machines raced toward a beer keg, plucked a doll off the top and raced back to the starting line. The audience was encouraged to throw nasty, duct-tape-encased pillows, stuffed animals and sweaters at the contestants as they passed.

The bikers had managed to dismember the doll by race two. By race three, Houley had managed to mark his exposed ass even more colorfully than his face via the traditional practice of road-rash. In race four, the loser stole the keg, and race six turned into a giggling, drunk version of UFC Fight Night after both riders crashed.

Lest anyone think it was all “man crack,” fear not, the ladies in attendance put on an unparalled display of plumberette crack. At one point, a young woman dressed like she stole both Grizzly Adams’ and Marilyn Manson’s wardrobes achieved at least 70 percent crack exposure.

The next game was “the fat kid pull.” A contestant would tie one end of about 30 feet of rope to his bicycle and the other end to an obese gentleman sitting on a metal skid. The first contestant was a blue-haired young woman with lots of facial piercings. She whipped out at full speed, yanked the fat guy about three feet and then made like a birdie straight into the asphalt. Another guy with a sort of greasy, un-gelled Mohawk flipped straight onto his protruding chin. The eventual winners won by doubling up on a two-story bike. Then, for variety, Houley vomited again.

As the football game got to the final few minutes, mostly everybody went inside the bar to watch Eli Manning get repeatedly, extraordinarily lucky on the path to victory. This did not please the Black Labelers, but they accepted the inevitable and waiting until the game had finished to treat the crowd to one last spectacle: bike jousting.

A gentleman referring to himself as “Thomatron” rides his tall bike. Photo by David Robert

While the Giants finished that night reveling the ecstacy of triumph, at Stupor Bowl VI, everyone went home a loser.