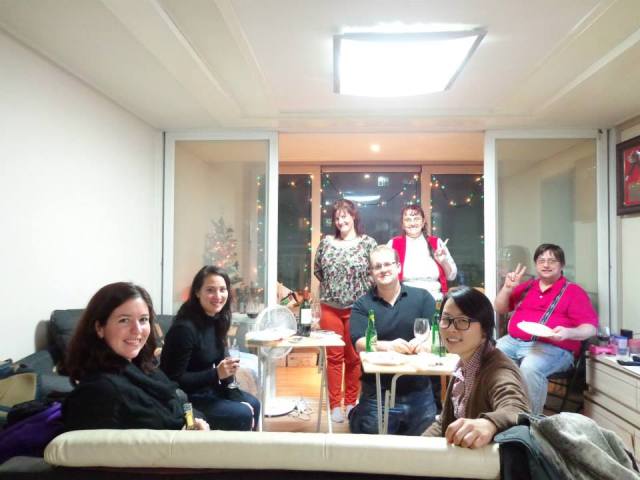 One of the biggest disadvantages of being an overseas expat is that people are in a constant state of motion. Whether it is to another city in Korea or another country in Asia, foreigners are perpetually coming and going. While it can be interesting to meet so many people from all over the world, exhilarating even – the unnerving nature of saying goodbye has become as commonplace as the chance encounter that brought two strangers together in the first place.

When I first moved to Suwon in the fall of 2012, I knew very little about what to expect. I was just focused on adapting to the new language and culture, as well as doing well at my job.  By my second month, I was already starved for human connection and in dire need of a creative outlet. Soon enough, things began to change for the better. I easily maintained a genuine sense of wonder and awe as I explored my new digs and frantically scribbled down all my observations as earnestly as I could.

I’ve been a writer most of my life, and despite the romantic appeal of cozily burrowing into some caffeinated  nesting spot on a regular basis, there’s an inevitable moment when trekking the crevices of one’s own mind requires some consideration of another mammalian writer type. I needed a counterpoint – I needed a writers’ community.

On one hand, there’s nothing more satisfying than hearing the lone click-clack of your fingers eagerly tapping out ideas like some ever devoted genie scribe whose every wish manifests as you desire.  There’s no one breathing down your neck and nitpicking at the water cooler, and no inane chatter to distract you from what you’d rather be writing about. This is especially important if you’ve ever been paid to write – either as a journalist, editor, technical writer or a myriad of other literary professions with tight deadlines. Sometimes writing for or with others cannot only be distracting, it can be a massive creative killjoy.

But on the other hand, sometimes it isn’t. One day, I saw a post from another writer expat. In four words, I knew I’d found it. Her post said:

“Where my writers at?”

I was one of the first people who responded to the post, and in the end, the only one to actually follow through. That’s when I met JL Sarchet, a writer with whom I eventually formed the Gyeonggi province based writers’ group, JAW (Just Add Water).

Before we met in person, JL and I messaged one another about our individual writing goals. She was writing at least one full-length novel, and I had a short story in the works as well as a handful of freelance opportunities. It felt a little scattered at first, but one thing was clear. Our writers’ group could and would meet the needs of a lot of writers out there.

Even though writing is a solitary act, it is important to recognize the value and necessity of debunking the myth of the chain-smoking, wild-eyed writer in a dimly lit dungeon. In turn, many writers are now writing in public places. The feral-eyed stereotype has been replaced with writers’ groups popping up all over the world, and South Korean expatriate writers groups are in high demand.

JAW determines how the workshops are run based on the types of people who’ve agreed to join our mostly bi-monthly meetings. It’s also a social group, and members form connections both literary and personal.  When a member moves, it’s a significant loss, especially since the rest of the group has grown accustomed to their literary feedback, perspective and distinct writing. Expatriate relationships tend to develop quickly and there is often a strong emotional dependence on one another – especially if you are living in a country with a vastly different culture, language or level of development

When JAW members bring their works of fiction or non-fiction to the workshop, a whole new world often awaits them. We have core members who specialize in critiques, and even editors from various backgrounds. We also have a variety of   bookworms whose feedback is essential to the writing process. Each member approaches writing, feedback and reading from a unique vantage point. It’s a community driven writing group and it couldn’t exit without folks like Martin Todd, a steadfast member who has participated with quiet intensity and thoughtful critiques since the group’s inception. There are other core members like Katie Eksten and Anne Merritt who routinely offer writers fair and constructive feedback, as well as reasonable opinions about the work of others.

Ben Garrido is an example of another core member whose absence was felt greatly when he moved, but his online presence in the group is enormous. His participation is valuable as well because he encourages others to improve their craft, rather than hurting his or her self esteem. There also newer members like Jamie Keener whose devotion to the craft is evident in her brave approach to both daily writing exercises and editing. Some newer members like Tammy and Chas Warren seem to represent the inner motivation that is shared in both expatriates and writers alike – they write their novels together and collaborate on every step of the writing, editing and publishing process as a team. All of these members, (and many others ) are very definitely not solitary parts of the writing process. Each individual’s participation encourages veteran and novice writers alike to face the writing process with courage and tenacity. Best of all, it creates an environment of healthy consistency – a necessary ingredient needed for any successful expatriate writer.

I feel blessed to live in a community where writers can share publishing information, craft tips, and just have a general good time together. We don’t live in a void. Indeed, writers need a room of their own in which to write – but also a community with which to share. True community exists within a process of deep respect and true listening for the needs of other people. Expatriate writers don’t need to hide anymore.

List of other South Korean writers’ groups and resources:

Imminent Quarterly (an online literary journal based in South Korea)

← Why I Wrote My Novels
CJ’s Nightmare, An Excerpt from The Potency. →