An Open Letter to Sinead O’Connor 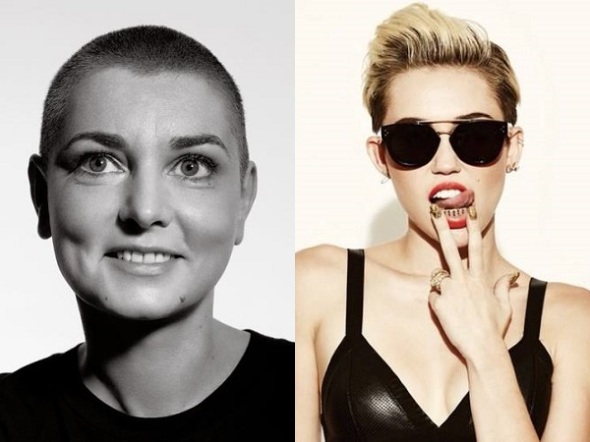 First of all, I would like you to know I think the attacks Miley Cyrus launched at you were unfair. I don’t know if I’d be as open as you are about potentially embarrassing psychological problems but, honestly, it’s probably a good thing you aren’t ashamed – I’m sure you are an inspiration to many people suffering bipolar disorder. Beyond all that, Ms. Cyrus’ insinuation that your bipolar disorder made all your life experiences invalid was, in addition to being pure ad hominem fallacy, distasteful and immature. I hope it is as obvious to others as it was to me how out of line Ms. Cyrus’ comments were.

But I can’t help thinking that you made a mistake with your attempted intervention regarding Ms. Cyrus’ “prostitution.” Please don’t take this the wrong way, I agree with you that she’s building a career as a sex object. I, along with you, think it’s very likely Ms. Cyrus will end up in rehab, face down in a swimming pool or killed in a drunken joyride. Where I think we do disagree, Sinead, is on the underlying assumptions.

There’s a lot to deconstruct in your letter, but let’s start with the issue of prostitution. It’s true that many prostitutes face horrible lives. They are viewed as dirty, broken women and, as a result, exist on the fringes of society. They are at danger for drug abuse, for early death, for exploitation and a hundred other depredations. It’s not a life I would want any of the women in my family to embrace mostly because I know society would treat them harshly.

But I wonder why that harsh view of prostitutes exists? It has not always been so. Indeed I wonder if you really subscribe to the beliefs underpinning prostitution’s horrible reputation. Do you really think sex is so sacred – so much more sacred than trusted counsel of the type you proudly purchase in your times of need – that it cannot be bought or sold? Even if you do believe this, does it then follow any woman looking for financial stability in her mate is prostituting herself? Do you really think sex debases a woman, makes her dirty? Do you really think Miley Cyrus’ sexuality is not her own, not truly something she can do with as she pleases? I wonder why, Sinead, you and other feminists are attacking sex workers like Miley Cyrus rather than the cultural assumptions that make their actions “disgraceful.”

Perhaps you, even upon reflection, do share those very Christian assumptions with society at large, though I rather doubt it. Regardless, I hope you can agree society that society would do well to at least lessen the stigma borne by sex workers.

That brings me to the second problem I have with your letter. Miley Cyrus is just about the last person on earth who needs help. She has millions of dollars, a father who used the power of nepotism to land her a dream job, enough ability “getting her tits out” to succeed as a well-paid sexual fantasy for at least another decade. If she melts down, she has the ability to get any sort of help she needs, whenever she needs it. If she blows all her fortune, daddy will step in and rescue her.

I understand that, as a female entertainer who resisted pressure to become the last generations’ sexpot pop singer, you probably empathize with Ms. Cyrus. You probably see her as the summation of everything you were afraid of becoming. I get it. But please, Sinead, take a minute and realize Ms. Cyrus doesn’t need and, more importantly, doesn’t really deserve rescuing. She made herself into a sex object – actually, I don’t think she even accomplished that. She recieved, mostly undeserved, the gift of stardom and, as an adult, decided to let others use that stardom to make her into a sex object. There are a lot of young women who don’t have millionaire dads, the power of nepotism or a decade of MTV breast exposure in their futures – you might want to turn your attentions to them.

I would recommend you stop saying “fuck” so much in your open letters. It undermines the “spirit of motherliness” you were aiming for.