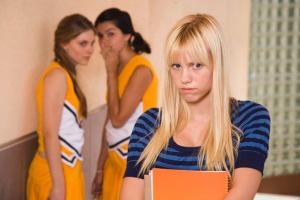 Melissa, 11 or 12 years-old and dressed in an expensive yellow vest with fur lining, walked with the rigidity and formality of a senior vice president for human resources. She stood before Jenny and spoke with a seriousness both upbeat and weaponized.

“I’m not your friend anymore,” Melissa said. “The circumstances make that impossible. I feel bad for you, but there’s nothing I can do. I’m sure you understand.”

Jenny drew back a step and exposed her teeth. The shock and surprise fed Melissa’s barely concealed glee. This prompted a short smile and a quick glance from Melissa to the watching girls down the hall, all of whom were evaluating Melissa for the efficiency and finality of her job performance.

“Bethany said I can go to the birthday party and be her friend but only if I stop being friends with you,” Melissa said. “You can see how this leaves me no choice.”

Jenny wanted to cry, but she did understand. She extended her hand and said “I wish you luck.”

Melissa shook her head in empathy but refused to take the hand.

“No hard feelings,” she said before turning and joining Bethany and the other auditors down the hall.

Jenny maintained her composure just long enough to close the bathroom door. When the tears had finished she collected her thoughts and made a plan. She had to win back Melissa, and preferably poach a few of Bethany’s other girls in the process. If she could win those friends – valuable and liquid as a well-managed currency – then she’d be happy. At this point, however, her calculations became more complex.

Bethany’s popularity emerged from some combination of conspicuous consumption, mastery of the fickle yet rigidly homogenizing fashion world and possession of enough political capital to conduct hostile takeovers of other girl’s cliques.

In order to compete, Jenny needed to convince the central banking authorities of her household – mom and dad – to authorize a stimulus package. That turned on a number of factors beyond Jenny’s control. The family finances were plagued by opaque record keeping (mostly in the form of computer passwords) and a culture of secretiveness regarding cash-flow. Further, the banking authorities were beholden to fantastic whims of their own – mostly in the form of incoherent and inconsistent moral lessons for which Jenny had no use. However, given enough time, she was sure the deflationary pressures on her social status would overwhelm her parents’ mercantilist impulses.

The difficulty would thus, in the long term, not be her parents’ reluctance to fund Jenny’s ventures per se, but the fact that those resources would best be invested on ventures the banking authorities would likely object to – namely the holding of a party where Bethany’s girls (but not Bethany herself, whom Jenny would pointedly not invite) might sneak illicit kisses from the rotating cast of suitably high status males and feign “craziness” under the influence of 8 proof wine coolers. In order to plan for this eventuality, Jenny thought it best to create a sort of escrow, a fund to be used for some sort of vaguely defined educational purpose. When the banking authorities next took sabbatical, Jenny would then tap those funds and, with the help of a purchasing agent, her big sister, acquire the necessary assets for her hostile takeover.

This would all come to naught, of course, if the girls didn’t want to attend. To mitigate this risk, Jenny would need a boyfriend. Boys seemed to suffer from a chronic lack of information (interest?) with regard to true female market position, focusing instead on superficial and highly visible assets in their valuation processes. While that was an annoyance as recently as ten minutes before, Jenny could now exploit the typically poor male information to acquire a boyfriend with higher status than her new outsider status would normally permit. It would, of course, have to be a boy with lots of “cool” friends to attend the party. James would perhaps suffice. He was fat, but he had several high status friends and Jenny could quietly dump him once re-instated in the hierarchy. More importantly, she would need to stockpile the wine coolers.

Jenny shook out her hands and smiled into the mirror. Her eyes were still red around the edges but she smiled nonetheless. She’d be back in the game soon enough.