Geekery of the Day

This dude could give one hell of a wet willy.

The New York Yankees are very rich. They have the highest payroll among all North American sports teams, their revenues are likely in the neighborhood of half a billion dollars per year. They spend five times as much as playoff teams like the Oakland Athletics or Tampa Bay Rays and yet they aren’t very good. Smaller, more agile teams have beaten them because they’re smarter and more daring and more willing to experiment. They’re smarter, more daring and more willing because they have to be if they want to compete. I have a suspicion this dynamic, this ability to overcome money with brains, applies to the larger world as well.

This leads me inevitably to a lengthy exploration of insect wings. One of the most amazing things about biological life is just how finely optimized it tends to be. Think of the most advanced, autonomous robot you’ve seen. Don’t disqualify that robot because it costs enough money to give the New York Yankees pause, don’t disqualify it because it required years to build. Now, compare its dexterity with that of a fruit fly. The competition will not be close because, when it comes to biomechanics and neural networks, mother nature kicks our greatest scientists’ asses by really rather a lot.

Fruit flies are also less creepy than our most advanced robots.

What’s really amazing though, is when nature gets into nano-technology and nowhere, seemingly, is nature more obsessive about nanotech than in the wings of a butterfly. In order to explain, I’ll start with the most macro features and work down to the smallest.

First, the butterfly relies on leading edge vortices to generate almost double the lift efficiency we can manage with fixed wing aircraft or helicopters. How do you make leading edge vortices? The short answer is a very complicated combination of precise motion and specific wing shape. I strongly recommend you check out this video for an example of this principal as applied to auto-rotating plant seeds. Insects use the same idea in their flight.

Beyond the macro shape of the wing, butterflies also realize increased efficiency through the use of their scales. We don’t actually know how this works, but labratory testing has shown a 10-15% decrease in the energy a butterfly needs to stay aloft with undisturbed scales vs. de-scaled butterflies. Do the scales subtly manipulate the boundary layer of air, preventing separation and tumble? Do they have some function in spawning and shaping the leading edge boundary vortex? Is there something else altogether? I don’t have a clue, but if I were an aerodynamicist I’d be very keen to find out.

This is a butterfly wing scale under an electron microscope. Can you imagine how neurotic you’d have to be to engineer and produce that shape?

On an even smaller scale, look at the incredible detail packed inside the butterfly scales. Notice how regularly shaped the voids are, how geometric the structure. On first glance, I assumed this was probably nothing more than the product of genetic flotsam, perhaps the most energy efficient way to build a scale – boy was I wrong. Those voids are matched to the wavelengths of visible light. Those amazing structures trap and absorb photons and, by subtracting whatever color’s wavelength they match, create the brilliant shimmering patters we all associate with butterfly wings.

And that’s not even the coolest thing about the nanostructures inside butterfly wing scales. Because of these tiny, incredibly efficient shapes, butterflies are literally solar powered. 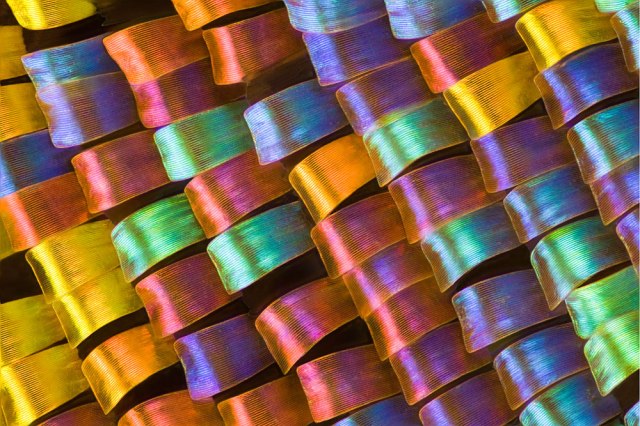 You are looking at the world’s prettiest solar array.

The really neat thing is, if we are creative enough, if we resist the urge to just throw money at our engineering problems, I think we can apply these lessons from insect wings to a huge variety of machines.

Scales and leading edge vortices are likely some of the big differences between our current flying robots – which require either big fuel tanks or tethers connected to car batteries – and an insect that can use less than a gram of body mass to fly thousands of miles in its annual migration.

Geometric, psuedo colors like the ones we see in butterfly scales could likewise form the basis for next generation paints or, if we get good at manipulating them, perhaps even computer screens. And if we can duplicate the solar energy absorption properties, we could relatively easily make almost any painted surface into a miniature electrical power plant.

All of these potential applications from a cursory look at a single part of a single bug. There is so much room for creative thinking in our world, so many opportunities to discover. I hope we’re smart enough to use them.

← Something Rotten in the Publishing Industry
The Fish Market →